Kristen Lamb, who is to be released soon from the city jail, is a beautiful 32-year old; for the last 10 months she has been in prison for what most readers of a yoga blog would consider a trivial offense.  Meanwhile Kristen has an 11-year old daughter at home in North Carolina who has missed and needed her mother.

What crime has Kristen serving time, at a cost of $25,000 a year to the public trust? According to what she told me, she was caught buying $10 worth of crack at an upscale Richmond hotel; shockingly, this drug was offered by a bellman-turned-informant. Immediately after the transaction, several officers surrounded her as if they were making a major bust.  Because this crime was a probation violation related to an earlier North Carolina conviction of possession of less than an ounce of marijuana, it caused immense suffering to Kristen and her family, and has cost taxpayers tens of thousands of dollars.

Something is wrong with a culture that wastes time and treasure punishing rather than helping people who have problems. Kristen is a young mother trying to make ends meet -- but with a history of problems related to drug addiction.  Never charged with a violent crime, not even theft, she has been convicted of possessing only small amounts of drugs -- and one high speed chase attempting to elude police. Surely our resources could be better used.

Possibly there are further incriminating facts of which I am unaware.  As a yoga teacher, my conversations are necessarily brief; there’s no time and the classroom is not the proper venue to discuss detailed history.  Most inmates are in jail for possession, or for small crimes related to drug addiction.  Most people smoke crack for one of two reasons.  A tiny percentage are pursuing adventurous -- maybe even spiritual--sensations, as humankind has done since earliest times.  But most purchasers are ensnared from an addiction that is similar to the larger population's addiction to any number of damaging legal substances or experiences -- including the vast amount of legal drugs purveyed by the pharmaceutical industry throughout our culture, which includes the penal system.   No doubt the penal system is a significant profit center for Big Pharma.

Jailing a crackhead for making a $10 purchase makes about as much sense as putting an obese food addict in jail for buying a McDonald's quarter pounder.

I am lucky to have met Chaplain Alonzo Pruitt five years ago.  Alonzo was open to my offer to bring yoga into the jail, and was able to act immediately with Sheriff Woody as his boss:  Sheriff Woody treats his "residents" with dignity, and makes it possible for many individuals and organizations to help those sent to him by courts and politicians.

During five years, less than one percent of the inmates I've met have appeared to me as potentially dangerous.  Mainly they are just people who need love, and help discovering their potential.

Most inmates arrive at their first class heedless of the simple logic of cause and effect, and with no recognition of mind-body awareness.  Both these deficiencies are remedied by a fundamental daily yoga practice.  So many broken bodies which yoga could dramatically heal.  Currently yoga is available to all the female inmates; but on the more populous male side, only those who are on one of the two Program Tiers may participate, which means they must have exhibited some inclination to want to help themselves.  The larger General Population I would greatly enjoy teaching -- a possibility that the new jail opening next year will offer.

It's a real joy to share this transformational self-help.  Kristen Lamb will be exiting the jail having learned a fundamental daily yoga practice that has the potential to change the arc of her life.  Kristen has shown exemplary dedication, attending twice-weekly classes for five months, missing only one or two -- and practicing almost every day in her cell what she learned in class.  Below are three letters she has given me during his time.

Surrender your mind and your spirit to the dedication of this meditational practice, and you will find yourself in the presence of Peace and tranquility, just as I did.  Nothing feels better than the withdrawing of oneself from their stressful environment & entering a place of unity, communing with the soul and spirit just as they are -- where life's heartbeat reawakens the senses.  The experience I've had has been nothing short of a much welcomed journey into the perfection of the moment.  Yoga has helped me to develop a pattern of wellness & focus that has maintained itself between my weekly sessions.  The practice of yoga has won my heart & I recommend others to participate in this Very Unique & challenging experience. 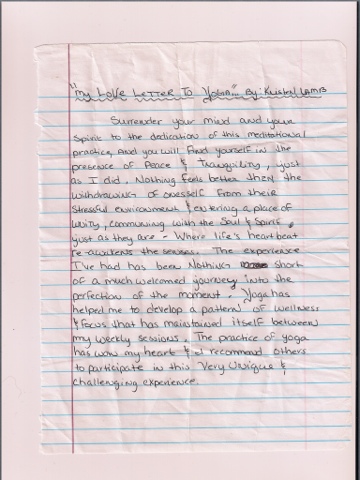 Robbie's yoga class @ Richmond City Jail has been such a wonderful blessing to myself as well as to the other inmates here.  Having been a resident here for the last 6 months, I had experienced an extensive amount of muscle deterioration from the lack of movement and the absence of regular, daily emotional & mental stimulation.

Robbie's class has provided me with not just physical exercise as well as a tremendous increase in body agility, but also is responsible for a greatly needed "SHIFT" in my mental state.  After each class (which is on Monday & then on Thursday) I am completely refreshed, focused & balanced.  My posture has improved tremendously & I experience a heightened sense of well-being that results from the purification of the yoga exercise itself.  Because of yoga, I have developed a sense of inner peace that would otherwise have never been a part of my 'time' here at Richmond City Jail.  My weekly dedication to the practice of yoga has inspired me to focus on self-care, from the types of food I put in my body, to the way in which I handle everyday interactions with other inmates (as well as officers).

As someone who is going to be housed here for another 3 1/2 months before going back home to North Carolina, I can most assuredly say that I am immensely grateful to Robbie for dedicating his time & energy to teach us the virtues of this wonderful practice.  It is something I am looking forward to continuing even after my release. 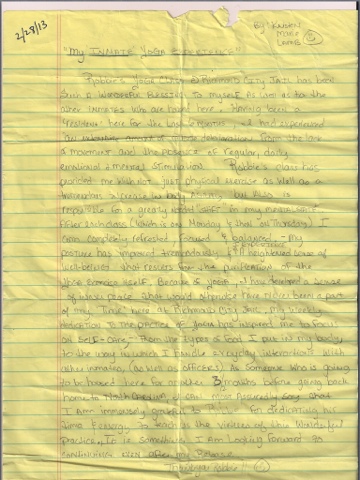 I have been at Richmond City Jail since August 2012, but have been an active participant in the weekly yoga class since January 2013.  I have a release coming up in June & can say with confidence that yoga has altered the way I completed my time here.  I'll be leaving Richmond in optimum physical health, with the fundamentals of a practice that has radically changed my body and given me peace of mind.  Because of Robbie's classes, in addition to my daily yoga practice, I have reduced the amount of medication I use for anxiety & depression.  I have less stress in my life and am less likely to "act out" in anger or frustration.

After 6 months of continuous yoga at RCJ, I can't imagine a day going by that I don't indulge myself in this beautiful practice where mind, body & spirit are in harmony with one another.  As a faithful participant, I encourage others to experience the benefits that yoga provides for those who are willing to try something new. 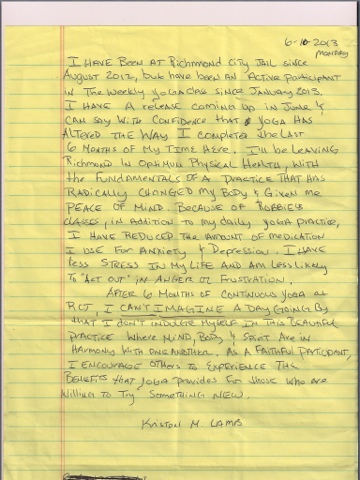