Despite the bizarre, abrupt and unexplained termination of my longstanding, successful and well-established efforts to help the downtrodden population of the Richmond City Jail,  I am glad to know that the yoga program to which I gave my heart and thousands of hours of my time, is having continuing positive effects on many people.

The specific Ashtanga Yoga Primary Series practice from Mysore, India, that I brought to the jail is still being practiced by former jail students in at least three prisons, and also by many who are now free.

And in one Federal Prison, it is even spreading.  Danny Carter sent me the following letter in December.  In an upcoming post, I will share how Danny has been able to continue spreading this yoga practice, with my ongoing encouragement and gifts of books, and David Swenson's generous gifts of more books and supplies. 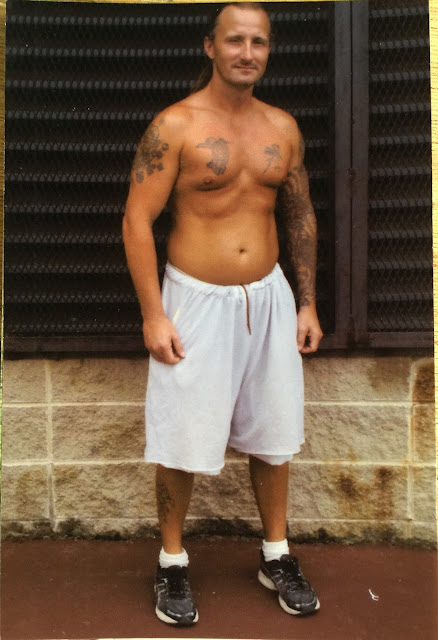 Around 2011 I had my first real exposure to an organized yoga practice through my now teacher and friend Mr. Robbie Norris.  He was bringing the practice of Ashtanga Yoga to the local jail and passing on his knowledge to people as myself that were working on finding a better way through life than they had previously had.  I myself have been an off and on heroin abuser.  I ended up in this facility that Robbie was teaching at for around 10 months for possession of heroin.  During this time I became rather well exposed to the teachings and philosophies of Ashtanga.  I practiced quite regularly and became a real believer in this practice.  Both its physical and mental benefits.  Robbie was not only bringing yoga to that facility but also a path to relief in a completely miserable situation.

Eventually I was released and went back to my life in the world.  My practice stayed strong for a good while but slowly it diminished.

Well now fast forward a few years.  I once again found myself incarcerated.  Not for new crimes I committed but for my past actually catching up with me.  In 2009-2010 before I met Robbie I was involved in some wire and bank fraud schemes with a few shady characters I was hanging out with in Las Vegas, Nevada.  Well in October of 2013 the federal government indicted the five of us.  So now here I am.  In a federal prison for the last 15 months or so.

Well I was depressed and some of the conditions are miserable being transported from state to state for court and being shipped off from anywhere near home to this prison I now reside in.

One day during this time that I was being transferred I found myself alone in a cell very stressed out looking at a storm through my window watching the rain fall.  The thought of Sun Salutations came to mind out of nowhere.  I decided to do some and see if it would still bring me some of the peace and contentment I used to get from the practice.  So I’m going through the Sun Salutations and as I come back to my feet from the final downward dog and resume the forward facing position I see a break in the clouds.  All of a sudden it seems the sun just burst through those rain clouds and blasted me with its rays for what seemed to be at least five long minutes.  It was like an epiphany to me a almost surreal moment.  I had achieved the peace I was looking for and remembered.

Well that was about a year ago now and from that day on I have slowly but continuously cultivated my practice back.  Along the way mostly from curiosity at first I have met and shared my knowledge of the practice of Ashtanga to the best of my ability with at least twenty-five or more people along the way.

Some have met with me only a couple of times to give it a try.  Others have become fairly strong practicers of this style of yoga.  We find us an unoccupied spot on the recreation yard and enjoy the day and the gift we have been given in this practice.

It makes me feel good to pass on my knowledge especially in my circumstances now.  I use to wonder what motivated Robbie to come to the jail where I first met him and be so dedicated to bringing his/our gift of yoga to the guys there.  I now think I may understand at least a little bit.

I now get to watch people’s practice of something that is so beautiful grow and flourish.  It’s great to see someone get excited about this practice as I was when I first started learning.

Yoga has afforded me the opportunity to meet and get to know people from a wide variety of backgrounds.  All because of the like, curiosity and love of yoga.

The exposure and teachings of Ashtanga that was given to me by Robbie are priceless.  He use to tell the guys in his class when I learned, “The practice is now ours for us to take anywhere.  All you need to practice is yourself.”  Well I’ve done and continue to do just that.

I’m glad I have been blessed with the opportunity to learn and pass on my knowledge of Ashtanga Yoga.  I’m still learning every time I practice and is still just as exciting to me as when I first learned.

I am now 6 to 18 months of my release.  I plan to keep practicing and spreading the gift here where I am until then.  Hopefully after I leave here I will once again become prosperous in life and my practice back in the free world.

This has been my yoga journey.

If you have read this I hope you have enjoyed.  I wish you all peace and happiness. 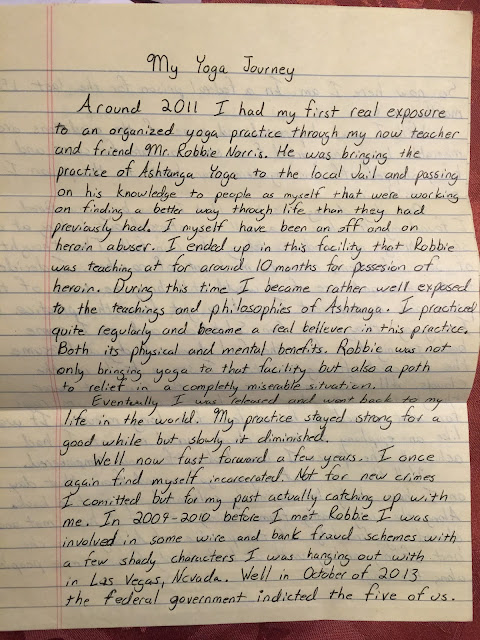 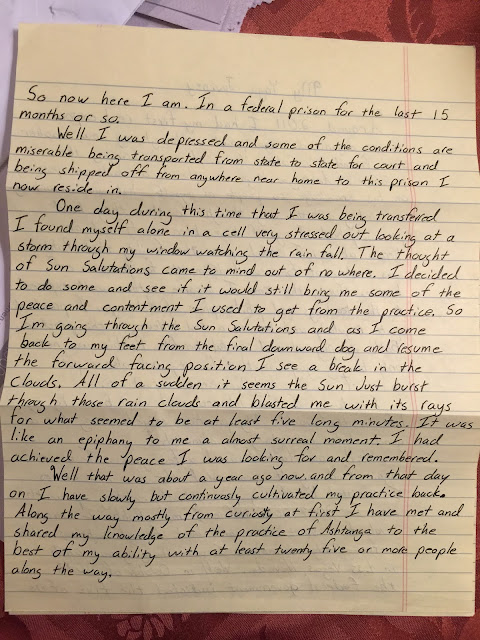 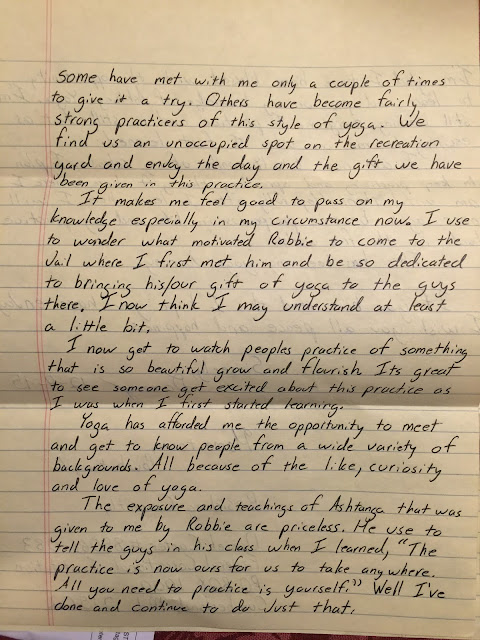 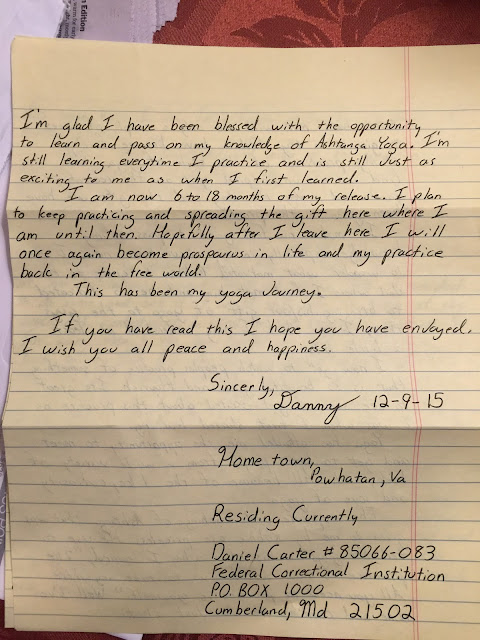 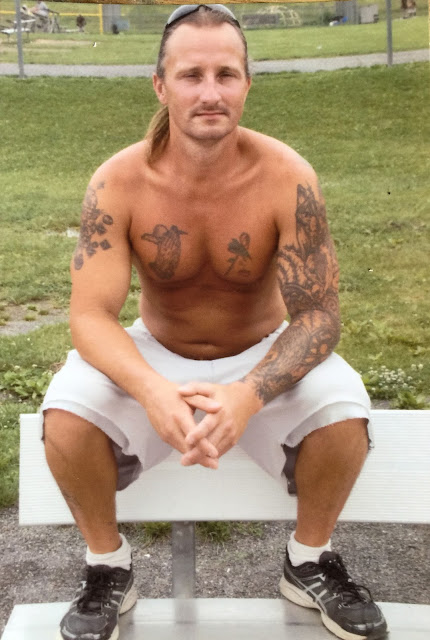 Blessings to you, Danny, for continuing your practice and following your desire to share it with others!
Posted by Robbie Norris at 9:09 AM