Logan was a scrawny 20-year old junky when in June 2011 he attended my yoga classes for a month during his stay in the Richmond City Jail.  Although I could see he was a nice boy underneath his problems, he wasn’t at jail long enough for me to get much sense of his character, or for yoga to have an obvious effect.  But the several yoga classes Logan attended in jail did plant a crucial seed of interest.

Three years later, on October 21, 2014, while sugaring my coffee at Starbucks, I heard a voice, “Hey, I think you taught me yoga at jail a few years ago.”  I turned and was so pleased to see Logan.  Imploring him to come to Richmond City Yoga, I got his commitment to come the next day.  The following morning when I arrived, he was there waiting.  That boy from jail is now a promising young man.  He wants to acquire the education and credentials to become a mental health therapist; hopefully, he will get help with this ambition, because the occupation would suit him well.  Logan is dedicated to working hard and doing the right things.  He’s funny, intelligent, attentive, and humble.  And his disciplined daily yoga practice is bringing him physical strength, mental resolve, and deserved confidence.

From age seven to 11, Logan suffered abuse that I cannot detail.  The pain and confusion that arose caused him to seek escape in whatever drugs he could obtain, and later, to qualify him for “partial disability” income due to PTSD.  By the time he was 13, Logan was addicted to oxycontin, and by 15, he was addicted to heroin and occasionally shooting up cocaine. Meanwhile, he was also taking all manner of prescribed anti-depressants and anti-anxiety drugs.

On twelve occasions since age 16, Logan was hospitalized for several days at a time in various psych wards.  Diagnosed at the time with bi-polar disorder, he now thinks that diagnosis was inaccurate -- his bipolar symptoms simply the manifestations of the anti-depressant and anti-anxiety drugs prescribed.  Compounding his problems, Logan was additionally prescribed anti-psychotics, such as Seroquel.

In March 2012, Logan switched from heroin to 125 mg of methadone, an extraordinarily high dosage.

Six months ago, blitzed on Nitrous Oxide and acting on an immediate urge to run an errand for his girlfriend, Logan went tumbling down a flight of stairs and broke his femur.  Thus began his wake-up call.  During this 16-day hospital stay, he was given 10 mg per day of hydromorphone in addition to his regular high dose of methadone, some oxycontin, and Seroquel.  Upon release, now with a metal bar running through his femur from knee to hip, he resolved that his old life must end.

Here is a determined young man:  when he left the hospital on July 18, 2014, he took himself off of 125 mg of methadone cold turkey.  Stopping such a dose unaided is almost unheard of.  Additionally, the methadone clinic advised strongly against such an abrupt withdrawal.

A month later in mid-August, Logan stopped taking the 30 mg of oxycontin and discontinued his nightly dose of the antipsychotic drug, Seroquel.  He undertook these measures with no support from the healthcare industry, and once he was able to walk the distance, began attending NA meetings.  Anyone familiar with serious narcotics addiction can recognize this supreme effort and willpowe

At Richmond City Yoga, I give one month of unlimited classes to any ex-inmate who has participated in the Richmond City Jail Yoga Program.  Additionally, I offer a nice gift to any such person who takes true advantage of the studio: if they come at least three times a week during their first month, they get a high quality yoga mat generously donated by David Swenson, one of the world’s top yoga teachers and author of the excellent and accessible Ashtanga Yoga: The Practice Manual (2007).

Logan completed his first month at RCY on November 22, just days after his 24th birthday.  He has attended class five to six times per week since his first visit.

I opened Richmond City Yoga in November 2013, for the express purpose of providing a place where ex-inmates and others with drug problems would feel welcome and encouraged to learn the method of self-help that I myself have found vitally therapeutic for the last 14 years.  Several ex-offenders have done some practice at the studio, but so far, only Logan has shown the discipline and fortitude that I envisioned when opening the studio.

I believe Logan is a special young man whose hardships have prepared him well for the inevitable obstacles to be navigated in daily yoga practice and in daily life.  He is genuinely courteous, and he has no entitlement mentality: he is willing to start at the bottom, and work hard.

A few weeks ago, I suggested that he visit a couple of restaurants and present himself to the owners, whom I know personally and briefed beforehand.  Logan agreed and told me what day he planned to go, and that he would be happy to do any work he could get.  It may seem trivial, but few ex-offenders I’ve known keep their word the way Logan does.  He always comes to the studio when he says he will (virtually every day); and he not only visited the restaurants at the appointed time with typed resumes, but donned a coat and tie and texted me a selfie lol.

Neither restaurant owner had a current opening, but both were gracious and invited Logan to check back in January.  Logan was undeterred, felt good for having made the effort, and indicated he would continue seeking to meet potential employers.  Last Wednesday after morning practice, I invited Logan to a diner for breakfast, and introduced him to the owner, Kathy, who was appreciative of my bringing her a potential worker, but said she didn’t need anyone at the moment.  We took our breakfast at the bar, enjoying conversation with Kathy while she was busy and on the run.  I could tell she was taking a liking to Logan.  She liked the big “karma” tattoo on his right arm.  He laughed and said, “That’s the first time my tattoos have been seen as a positive by somebody who might give me a job!”  When I went to pay, Kathy said, “Robbie, my dishwasher just called in sick — can he start today?” Then she decided to wait, but asked Logan to come the following morning.  He went the next day, last Thursday, and washed dishes for five hours, happy to be employed.  Not only did he fare well in Kathy’s judgment, but on Friday she had him ringing up customers and began training him to work the front counter and wait tables.  It didn’t hurt that customers remarked on Logan’s cheerful demeanor.

Of course, I am happy for Logan.  Here is a young man who a few years ago was heavily addicted to narcotics and thoughtlessly seeking out and accepting whatever other drugs came his way — and who was unable to work.  Now free of drugs save coffee and nicotine, he is working full time, and aiming toward a very realistic dream of becoming a therapist.

My wish is that anyone who reads this, who is so inclined and who has the means, will please contact me so that we can join forces to help further this young man’s dream.

Many thanks to RCY student Stacey Scott for paying Logan’s second and third month’s dues.  Thanks to the anonymous donor and theCommunity Foundation for supporting my work at the jail.  Thank you,Eddie Stern, for being the fiscal agent for the grant, and for being a continuous source of inspiration and education.  Thank you, David Swenson, for your generous donations of books and supplies to help inmates and indigent ex-offenders.

Here is Logan’s recent letter, written a week before landing his new job at the diner.  (Below the typed version is his handwritten letter.)


Before trying yoga, I had a preconceived notion that it was an easy or “whimpy” exercise regime for bored housewives.  Boy was I wrong.  I first tried yoga in the Richmond City Jail while I was incarcerated there for a month [in 2010] because of minor possession of a schedule one controlled substance. I still did not take yoga seriously by not applying myself to the practice and not practicing on my own.  Several years later I saw Robbie at Starbucks on the way to one of my 12-step meetings.  He enthusiastically invited me to his studio, citing his offer of a free month of classes to those who participated in his RCJ Yoga Program.  I promptly went to the studio and came as often as possible, and practiced on my own as best as I could not even having a mat of my own.  I now still go to the studio as often as possible, and practice every day with the mat most generously donated by David Swenson.  I was even blessed by another student, seeing my dedication and progress in the practice, to have my tuition in the studio sponsored by them [for my second month].  Yoga has benefitted my health in every aspect.  It has stabilized my emotional health, as a natural anti-depressant and mood stabilizer.  I always feel happier, more peaceful and more confident in myself.  It continues to tone and strengthen my body, even after breaking my femur and having permanent hardware inside of the bone.  The open-mindedness, willingness, and dedication to a daily yoga practice has translated into other aspects of my life.  Such as my search for employment, and especially in my daily recovery program from addiction.  Yoga keeps my life in perspective and keeps me humbly dedicated to bettering myself daily.  I cannot begin to express my gratitude to Robbie, those who support the wonderful outreach work he does, and all those who support and encourage me in my practice. 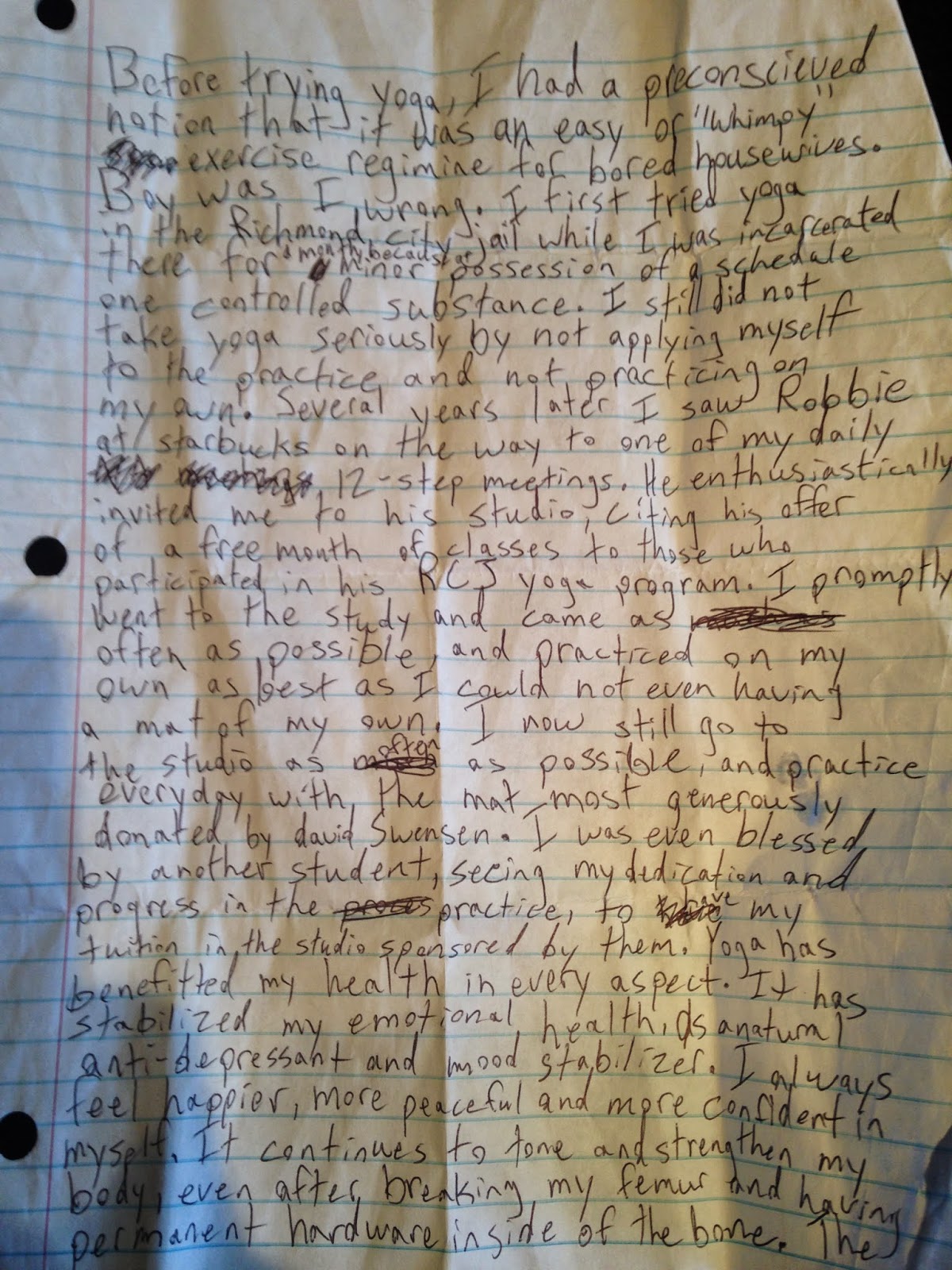 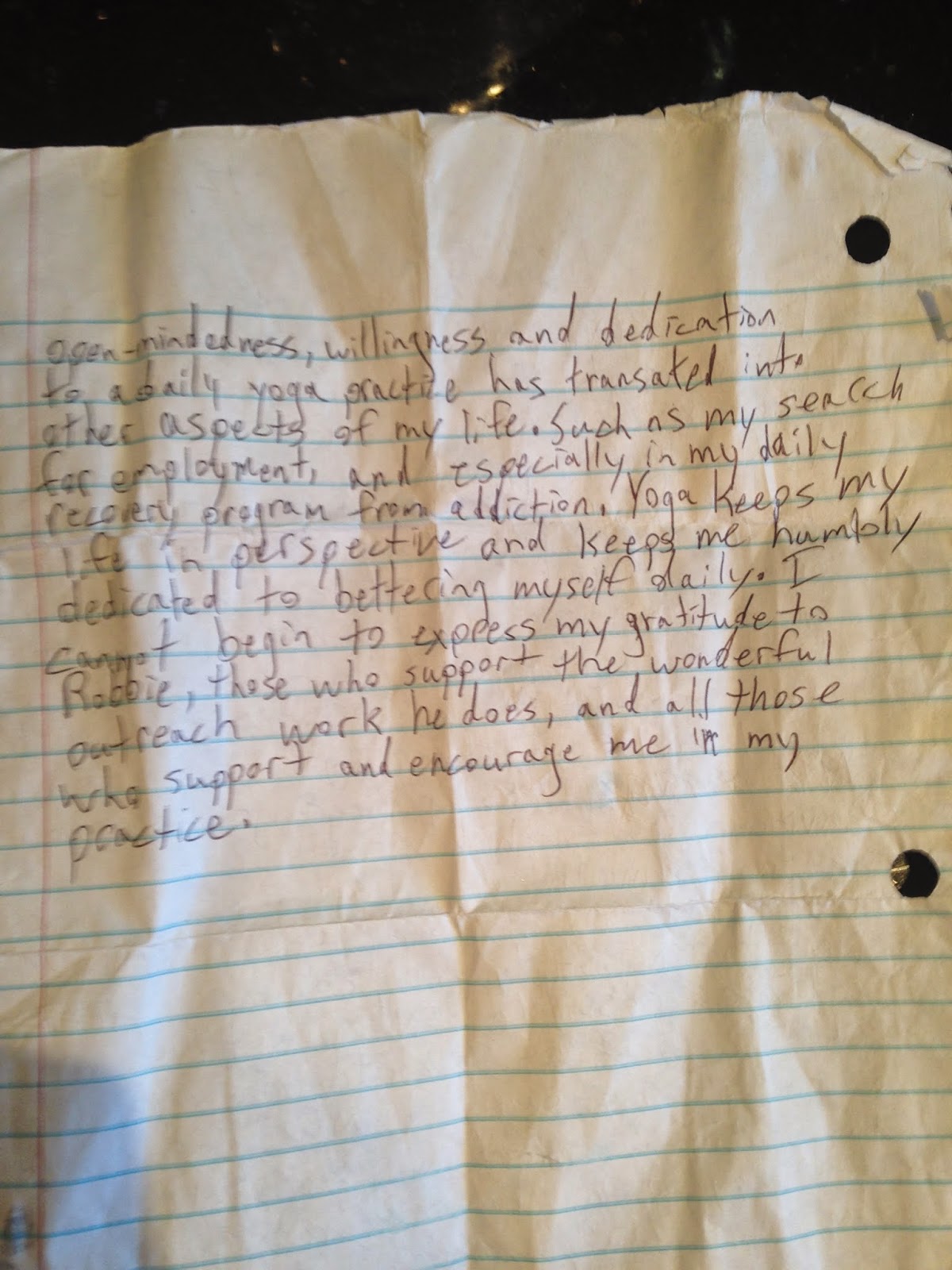 Posted by Robbie Norris at 1:27 PM