I’ve never met David Swenson, but when I wrote to him last year about the Richmond City Jail Yoga, he replied with the same wonderful kindness and enthusiasm that is so apparent in the section titled "Thoughts" on his website:

WOW your work is an inspiration! Thank you SO VERY MUCH for sending it along. If there is something I can do to support your work let me know. Maybe I can donate books or DVDs to your programs. Also let's keep in touch and maybe someday I can come there and participate in the program with you!

I send you my best wishes and respect!

We continued email contact, and meanwhile there arrived at my door two big boxes containing 10 high-quality yoga mats, two copies of Ashtanga Yoga: The Practice Manual (2007), David’s instructional DVDs, and the fabulous Advanced A & B Series (2004) featuring David Swenson, David Williams and three others practicing on the beach in Maui.

Because David’s mats are of superior quality I doled them out slowly, to the most consistent practitioners, securing promises that the mats would be returned to me should the inmates get released or shipped or quit the class for any reason. 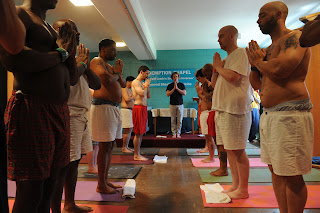 The prisoners were grateful, and when they realized these gifts came from a man respected the world over for his longstanding practice and teaching abilities, they felt especially honored, as can be seen in their letters below.

There are 30,000 prisoners a year processed through the Richmond City Jail, which was built to house 800 inmates and usually holds around 1500.  Some are in jail for a short period before being released or shipped to state or federal prison, and some have been in the jail for more than three years.  Because of this high volume of traffic through the jail, we have at least one new student in almost every class. 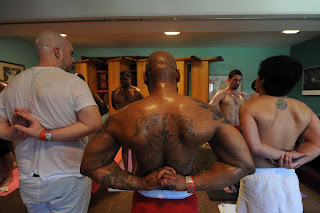 Thank you, David Swenson, for your moral and material support!  You have been a great inspiration to me during my 11 years of practice and I look forward to meeting you one day. 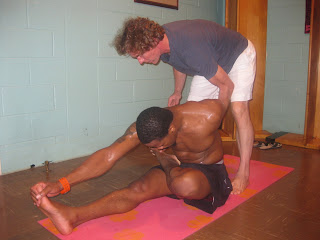 Below are letters from four inmates written to David Swenson last July, followed by his response to them:

My name is Sean L Hardy.  I am one of the fortunate & grateful recipients of your generous contribution of yoga mats and videos to the Richmond City Jail yoga class, via Mr. Robbie Norris, who dedicates his time, talent, and wisdom to all of us, so faithfully and freely, three times a week.

I also participate in a recovery program here in which consists of many educational groups & lessons, such as anger management, relapse prevention, fatherhood, twelve steps, etc., none of which has reached me on the deep level nor put me in touch with my true self and enlightened me to the magnitude that Mr. Norris’ class has had on me.

I’m 43-years old and am finally finding the life long search, for inner peace, I’ve been missing, through Ashtanga and Siddha yoga.

Thank you again sincerely and so much for your compassion and generous contribution.

I am writing this letter to thank you for the yoga mat I received in class from Robbie.  First let me admit the Richmond City Jail is the last place I’d expect to get drawn into something like yoga.  And I am very much drawn in and captivated by its effects and benefits but am sure you are well aware of that.  Not only is it physically refreshing, I can’t get over the calm I get from a very strenuous workout not to mention I can touch my toes.  That alone is enough to have me in awe, seeing as how I’ve never been able to do that due to a curved spine.  After receiving the very comfortable mat, I sat on my bunk and a strange emotion came over me.  I realized I never received anything as a reward to dedication to something.  Except maybe legal trouble and incarceration.  So, what is just a mat to some I see as a stepping stone to better achievements.  Not to mention motivation to master this spiritual art.  I will add this experience to the growing list of life skills I am taking with me once I’m released to embark upon my world changing mission.  You’ve shown me the power one stranger can have on another person’s life with one simple kind, selfless act and I thank you from the warmest place of my heart.

This is Keith Thompson one of the many yoga students at the Richmond City Jail Robbie Norris has touched so very deeply with his love and compassion for us all.  To open our minds and to truly find our paths of enlightenment.  He brings people like your self to the acknowledgment of people like myself behind bars.  Trying to renew our minds, bodies, souls for all of mankind.  To give back the love and compassion just like it has been given so freely from you with the loving gifts of yoga the mats and DVDs.  I hope one day I will be able to touch people’s lives and hearts the way you did that day when Robbie Norris came in with those yoga mats and DVDs.  Thank you so much with all of my love of my being.

AUM.  Just a few words of thanks and appreciation for the asana mats.

I have only been practicing some 8 mos. Tho’ even or especially at 54; I feel that Astanga has helped me to focus and with discipline it too has strengthened both physical and subtle bodies … my body much more agile and lithe.

Through the auspices of my yoga instructor Robbie Norris I have been exposed to Hatha/ Astanga Yoga and feel my life changed.  And too I have viewed yoga master Jois in NYC 9/11 (what a collective energy and beauty) and as well “David Swenson and Friends” (in Maui), and your earlier work in “Mysore.”  I have to admit that my naivete renders me unable to fully appreciate the depth and capacity of 2nd and 3rd Series Astanga.  However, I see its grace, ebb and flow, kriyas and sublime existence --- a life refining beyond what words can express, and I think to myself that we are about the same age – how amazing you were, so young and focused, this life.  I am so grateful to you, Robbie, et al, who have made Astanga Yoga available to me.

And again thanks for all the things.
AUM.
W/love,
Alan

Posted by Robbie Norris at 2:13 PM