Bryan Shull, 39, learned the Primary Series of Ashtanga Yoga in the Richmond City Jail.  When he was "shipped out" to the state correctional system in August 2010, he began sending me interesting yoga-related letters with fabulous artwork on the envelopes. The first letter from Dillwyn Correctional Center is transcribed (unedited) below.  To see Bryan's handwritten letter, click here.   More to follow. 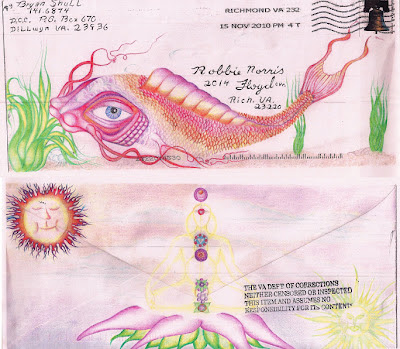 We have nothing but time…

… I hope you’re well and your work at the jail’s going on, please with Jen happy holidays for me & tell her I could sure use some of those cookies about now.  This is the part where I say that I’m on a rant & that if you’re ever out this way please stop on by & thank you so very much.

And now for the poetry section of the talent show!

He gives more grace when the burdens grow greater.
He send more strength when the labors increase.
To added affliction, He adds His mercy,
To multiplied trials, His multiplied peace.
When we’ve exhausted our stored endurance,
And our strength has failed as the day’s half done.
When we reach the end of our hoarded resources,
The father’s full giving has just begun.

His love has no limit, His grace has no measure.
His power has no boundary known unto men.
Far out of his infinite riches in Jesus,
He gives and gives … and gives again.

Posted by Robbie Norris at 2:44 PM